a Solicitor at KTS Legal completed his Masters in Law from University College London in 2010 and was applying for jobs in United Kingdom.

He was unable to get a job in London due to his immigration status as an Indian citizen which was not treated on par with a person holding a European Union passport.

Subsequently landing in Singapore, it took him 11 years and a roundabout way to reach London.

This has changed now, especially post Brexit. India is seen as an able partner by United Kingdom. They entered into a landmark migration agreement in May 2021 and are proposing to enter into an extensive trade agreement soon. What does this means for Indian Citizen’s.?

On 4th May 2021, Britain’s Home Secretary Ms. Priti Patel and India’s Foreign Minister Mr. S Jaishankar signed the Migration and Mobility Partnership Agreement. The aim of this agreement is to address the issue of illegal migration between the countries. This partnership agreement is supposed to speed up the return of nationals of one country with no legal right stay in the other country.

While one part of the agreement addresses on the issue of illegal immigrants, the better and the most interesting part of the agreement is enhanced mobility provisions for young professionals of either country to move to the other to live and work for up to two years. The new route for young professionals allows nationals of India between 18 to 30 years old to move to the United Kingdom for a period of two years which should later pave way for an easier way to migrate to the United Kingdom. Needless to say, that this works in the other way too to assist young British nationals to migrate to India.

The biggest challenge before the British government is to properly identify and ascertain that those, they claim to be illegal immigrants from India are indeed nationals of India. This is a practical issue which needs to be addressed before it can be claimed that this agreement is successful.

As Britain left the European Union the cuffs holding them from entering new trade deals with countries outside the European Union has come off. With this in mind, the United Kingdom’s Department for International Trade has published an open consultation on 25th May 2021 seeking opinion from the public regarding the current trading arrangements with India and what other improvements they can make to enhance the trade relationship with India.

This proposed Free Trade Agreement is a follow up to the Enhanced Trade Partnership signed recently between the countries. Upon successful execution of this Agreement, it is expected that there will be an increase of import and export flows, investment flows, productivity through efficient allocation of resources and openness to international competition between the countries. The historical relationship between these two countries and the common law system should make it easier for sorting out the nitty-gritties of this Free Trade Agreement.

The future seems to be promising for the young professionals and businesses in India and United Kingdom and collaboration between these two countries. 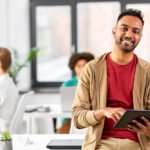 BUSINESS IMMIGRATION TO THE UK FROM INDIA
X